These were developed by Bob Hughes for the purposes of adults who study and facilitate play.  It is examined in far more detail in his 1996 book A Playworker’s Taxonomy of Play Types, London: PLAYLINK, UK.

Children’s play is rich, varied, organic and constantly evolving.  It can explore different types at the same time, flow from one to another and back again.  As such, these definitions are by adults, for adults.  They’re useful in helping us be more specific when we’re talking about play and play provision but will only ever capture a narrow aspect of the wealth of children’s play.  This list is also evolving and should not be assumed to ever be complete.

There has also been controversy over the years about the name of the last play type, Recapitulative.  It is left off of some lists entirely but I have included it here (in spite of my own hesitations) because it addresses forms of play not found elsewhere in the list and because this controversy ought to be openly engaged with.

Symbolic Play – play which allows control, gradual exploration and increased understanding without the risk of being out of one’s depth.

Rough and Tumble Play – close encounter play which is less to do with fighting and more to do with touching, tickling, gauging relative strength. Discovering physical flexibility and the exhilaration of display.

Socio-dramatic Play – the enactment of real and potential experiences of an intense personal, social, domestic or interpersonal nature.

Social Play – play during which the rules and criteria for social engagement and interaction can be revealed, explored and amended.

Creative Play – play which allows a new response, the transformation of information, awareness of new connections, with an element of surprise.

Dramatic Play – play which dramatizes events in which the child is not a direct participator.

Deep Play – play which allows the child to encounter risky or even potentially life threatening experiences, to develop survival skills and conquer fear.

Fantasy Play – play which rearranges the world in the child’s way, a way which is unlikely to occur.

Imaginative Play – play where the conventional rules, which govern the physical world, do not apply.

Locomotor Play – movement in any or every direction for its own sake.

Mastery Play – control of the physical and affective ingredients of the environments.

Role Play – play exploring ways of being, although not normally of an intense personal, social, domestic or interpersonal nature.

Curious to learn more about the philosophies and practices of playwork?  We have a great online course, and robust financial aid program.

More interested in increasing your vocabulary around play, and using these terms to build a more playful life for yourself?  This e-course is totally free, and a lovely place to begin. 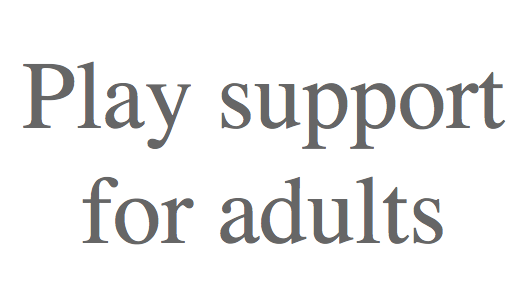